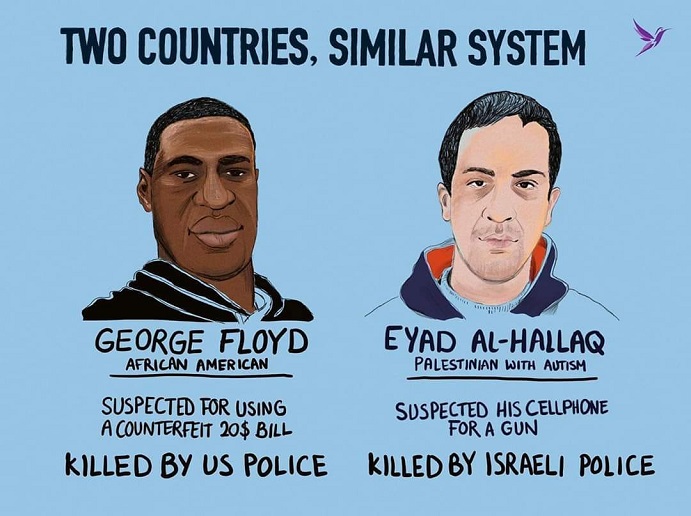 ‘There’s a lot of similarities between the police forces and the disproportionality of force used against protesters trying to achieve justice’, one Palestinian tells MEE.

The angry scenes that have erupted in at least three dozen US cities since the police killing of George Floyd last Monday have activists and Palestinian Americans across the country drawing stark comparisons with Israeli tactics.

US authorities – police and national guard – have tear-gassed peaceful gatherings, mass arrested protesters, implemented curfews, detained lawmakers and indiscriminately targeted journalists, all of which are tactics commonly used by Israel against Palestinians.

As some of the protests have turned violent, especially late at night, with some demonstrators burning police cars, vandalising buildings and looting stores, the debate over language used to describe these events has also been similar to discourse in the Middle East.

Over the objections of most Palestinians, Israeli authorities routinely use the term “riots” to describe even small Palestinian protests.

While critics in the US have used that word to describe the burning and looting of buildings in some of the recent demonstrations, many activists say the behaviour may be more indicative of a “rebellion”, or “uprising” (the English translation of “intifada”), and compare the protesters’ actions to the economic damage that took place during the Boston Tea Parties, which helped spark the American Revolutionary War.

Mariam El-Khatib, a 24-year-old Palestinian American who grew up in the occupied West Bank during the Second Intifada, attended the first protests in Minneapolis on Tuesday, the day after a white Minneapolis police officer killed the 46-year-old Floyd, a Black man.

Police had arrested Floyd after responding to a report of someone allegedly trying to use a fake $20 bill at a local convenience store. Video footage of the incident shows him in handcuffs as three policemen pin him to the ground, with one officer pressing his knee on Floyd’s neck until he finally loses consciousness and dies.

In the video, Floyd can be heard repeatedly gasping that he cannot breathe. Since then, the ongoing protests have erupted across the country.

‘A flashback to Palestine’

Most protests have begun the days peacefully, often becoming more confrontational at night, as some police forces quickly turned to riot control measures, video footage of the events shows.

“When they started using tear gas against the protesters, that was for me like a flashback to Palestine, which was the last time I had smelled tear gas,” El-Khatib told Middle East Eye, recalling events that took place during the day at the first protest.

While many nations use tear gas as a form of crowd control, Israel’s near-daily use of the noxious gas is notorious, with researchers in 2018 labelling the occupied West Bank’s Aida refugee camp as “the most tear-gassed place in the world“.

Since Tuesday, El-Khatib said, the sheer numbers of police compared with protesters has been reminiscent of the dynamic that emerges during Palestinian demonstrations against overwhelming Israeli forces.

Earlier this week, activists on social media began pointing out that about 100 Minnesota police officers had attended training at an Israeli consulate with Israeli law enforcement in 2012.

American police forces across the country have, since the 90s, been going for training to Israel – a country criticised by human rights groups across the world for its extrajudicial killings and disproportional use of force against Palestinians.

Even the US Department of State has in the past cited Israeli police for carrying out “arbitrary or unlawful killings”.

According to Amnesty International, hundreds of US law enforcement officials have gone through training in Israel, both on privately and publicly funded trips, while thousands more have been trained by Israeli forces in the United States.

Pro-Palestinian activists have, for years, campaigned against the practice, arguing that Israel is not a country that US police should be emulating.

“What American law enforcement learn from Israeli policing is an official policy of marking entire populations as suspect, a model that is in direct opposition to efforts to end the racial profiling that has long been constitutive of American policing,” Jewish Voice for Peace said in a 2018 report.

After the first night of the US government’s crackdown on protesters this week, the Palestinian solidarity working group of the Democratic Socialists of America said that the police violence in Minneapolis was “straight out of the IDF playbook”, using an acronym for the Israeli army.

“So-called ‘less lethal’’ weapons including tear gas are manufactured in the US and sold to Israel, where they are tested and used on Palestinians,” the group said, adding: “Surveillance tech is made in Israel & brought to the US to invade the privacy of Black, brown, Muslim, poor and otherwise marginalized people.”

‘Selective use of aggression’

On Saturday, Israeli forces shot and killed an unarmed 32-year-old Palestinian with autism just outside his special-needs school.

Forces said they believed Eyad al-Halak was armed, and as he was trying to run away an officer shot him several times with an M-16, killing him instantly.

El-Khatib said she believed that if al-Halak had been Israeli, rather than Palestinian, the shooting would never have happened.

El-Khatib pointed to disparities in the peaceful and tempered response of police to highly armed and mostly white demonstrators who stormed US state capital buildings in protest against coronavirus restrictions earlier this month.

“The selective use of aggression is very similar and reminiscent of what we see in Palestine by the Israeli forces, where they choose to use their aggression on the Palestinian population, but if an Israeli settler commits aggression they get nicely escorted away,” she said.

Palestinian-American comedian and law professor Amer Zahr drew a contrast between the deadly use of force against Floyd and the treatment of Dylann Roof, a white gunman who was calmly arrested and taken into custody after shooting and killing nine black parishioners inside a church in 2015.

“Don’t ever forget that they murdered George Floyd and they bought Dylann Roof a hamburger,” Zahr said.

“Given the horrific and murderous legacy of white supremacy, my Black American brothers and sisters have repeatedly acted in an extraordinarily peaceful manner,” he said in another tweet.

Still, many demonstrators have criticised what some have called “outside actors” who have thrown bricks, rocks and Molotov cocktails at police cars and buildings, much like the tactics often used by Palestinians during clashes with Israeli forces.

‘There’s a lot of similarities’

One Palestinian now living just outside Minneapolis told MEE that he first came to understand the full scope of the Black American struggle in 2014, when protests broke out in St Louis against the police killing of unarmed 18-year-old Michael Brown.

Mohammed – whose name has been changed for this article – grew up in a refugee camp in the occupied West Bank, but had come to the US for a master’s degree and was living in St Louis at the time.

He said before those protests, which also spread across the nation, he had no idea that Black Americans were dealing with so many of the same injustices he had been struggling with all his life as a Palestinian growing up under Israeli occupation.

“There was so much I didn’t know,” Mohammed said. “I was shocked to see that a black man with his hands up had been shot by a police officer, left with bullets in his body, bleeding on the ground, but that’s something I am used to seeing in Palestine on a daily basis.”

Six years later, having lived in Minneapolis for almost a year, this time around he is well versed in the Black American struggle and was not at all surprised to hear that another white police officer had killed another unarmed black person.

Mohammed said all one must do is replace the word “white” with “Israeli” and the word “Black” with “Palestinian”, and the incident would sound very much like a regular news report coming out of Israel.

He said the massive protests following the killing and subsequent government crackdowns were to be expected.

‘Justice for their cause’

“There’s a lot of similarities between the police forces and the disproportionality of force used against protesters and other people who are trying to achieve justice for their cause,” he told MEE.

“It reminds me [of Palestine] not only because of the police tactics that they use against the people, but because of the whole system, which aims to colonise people’s consciousness and dismantle any type of popular movement.”

Sarah, a Jewish American from the Minneapolis area who is married to Mohammed, has been a social justice activist for most of her life. Her name has also been changed for this article because she has been banned several times from entering Israel.

For her, one of the most frustrating aspects of the protests that erupted in the aftermath of Floyd’s killing is the negative reaction from many white liberal Americans to the resulting economic damage, to the looting and fires. She says it devalues “people of colour for the way that they are rebelling against injustice”.

“White people have this need to come in and dictate and devalue and enforce their ideas of what is a politically correct form of resistance … I’ve heard so many people say things like ‘well if Palestinians didn’t throw rocks, then…’, as if throwing rocks devalues their cause.”

In any case, Mohammed and Sarah agree that systemic change must take place in the United States and Israel if there is to be any hope of achieving the kind of justice that will lead to peace.

“The same events that happened in the past keep recurring,” Mohammed said.

“What are we learning? How many people should die until we find justice? All the questions that I am asking myself now, I can’t differentiate if I am asking for Palestine or for the Black and indigenous community here.”

Sheren Khalel is a Washington DC-based journalist who has previously worked throughout the Middle East, focusing on human rights, refugee issues and conflict