Home nieuws It is too late for the PLO to cancel the agreements with... 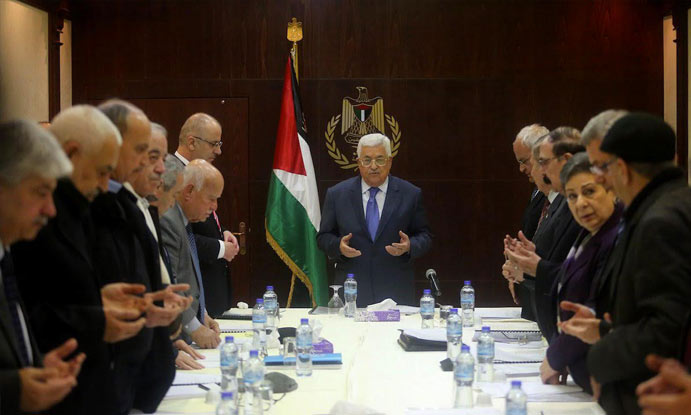 The Palestinian Liberation Organisation (PLO) has been threatening to cancel all the agreements with Israel over the latter’s intention to annex large parts of the occupied Palestinian West Bank, including most of the illegal Israeli Jewish settlements and the Jordan Valley.

The PLO threatened to sever previous agreements on numerous occasions, however it has never followed through with it, even when Israel has carried out violations against Palestinian rights. Member of the PLO’s Executive Committee, Azzam Al-Ahmad, said this weekend that the organisation “is serious in its threats this time.”

Hebrew newspaper Maariv today also reported several Israeli officials saying that the PLO’s threats “are more serious this time” because they are related to the annexation plan which is a measure that would change the reality of the region and “this will embarrass the Palestinian Authority before the Palestinian people”. The Israeli newspaper added: “Therefore, the Israeli army is preparing for escalation on the ground.”

Political analysts and experts from the occupied West Bank and the Gaza Strip did not believe that the PLO would carry out its threats and sever its ties with the occupation authorities.

“The PLO will never do anything in response to the Israeli planned annexation of large parts of the occupied Palestinian territories,” Mustafa Al-Sawwaf, a political analyst from the Gaza Strip, said. He stressed that these threats are no different to previous warnings, but he said that “they are being made to remind the Palestinians that the PLO is their representative and it is the sole body which fights for their rights.”

For his part, the Palestinian Professor of Political Sciences at Al Najah University of the occupied West Bank, Abdul Sattar Qasim, downplayed the effectiveness of such measures.

Speaking to MEMO, Qasim stressed that these threats are not serious and said if such threats were fulfilled, they would never make a difference. “It is too late. If the agreements between the PLO and Israel were cancelled, nothing will happen because the Palestinian Authority (PA) has already achieved the strategic goals of the Israeli occupation in the long term,” he said.

He added: “The PA, which was established as a result of these agreements, has destroyed all aspects of the Palestinian nationality.”

Qasim also said that the PA has already made social and political division among the Palestinians and “this way, we have lost the power to mobilise international support for our cause because we are unable now to agree on a credible united body that represents the Palestinians on the international podiums. So that, we will not be able to do anything if the agreements were abolished.”

Regarding the cultural damage, Qasim said: “The PA has been able to change the priorities of so many Palestinians from fighting the Israeli occupation and sacrificing for the sake of their homes and lands to accepting the normalisation of ties with it and working just to feed ourselves and our families.”

Israeli fears that the situation it different this time, do not stem from political platforms, Al-Sawwaf said: “The situation is different in relation to the people, not the PLO or the PA.”

The analyst told MEMO: “The Israeli occupation is sure that the PLO and the PA will never ever do anything, but they are not sure that the Palestinian people will be the same. The Israeli occupation is always preparing for the worst because it is always afraid that the PA might lose the rein of the Palestinians and this will be a crisis for Israel and the PA together. If this happens, it could oust the PA or if it is strong and sustained, it would end the occupation.”

For his part, Qasim stressed that the Israelis are not serious even about their fear. “They are not afraid at all … they empowered the PA to carry out their plans against the Palestinians.”

“The PA,” he continued, “is committing violations and even being held accountable for this on behalf of the Israeli occupation.”

Israel is not depending on US support for its annexation plan or on international silence or even the Arab states who are competing for normalisation; it is depending on its own pre-planned endeavour. Israel created the PA and empowered it to take on the responsibility of the occupier; now it’s reaping the rewards.

Motasem A Dalloul is MEMO’s correspondent in the Gaza Strip