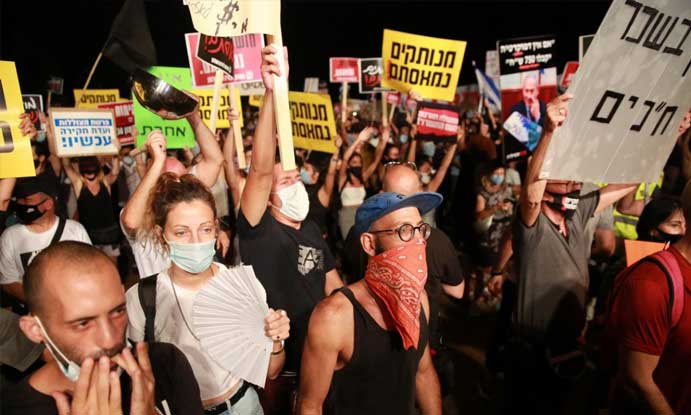 When infections fell, he went on television on May 26 to boast of his success. “Have a beer. Enjoy yourselves,” he said. Many Israelis did just that.

But infections later surged, and opinions polls showed confidence in Netanyahu was falling. He now faces nationwide protests over the state of the economy, hit by the coronavirus.

Waving banners outside the prime minister’s Jerusalem residence, the demonstrators are led by young people who scarcely remember any other leader — Netanyahu has been prime minister since 2009 — but want him to resign.

“We are a generation who have lost complete faith in the system. People are fighting for their livelihood,” said Costa Black, 30, who was arrested during the protests and lost his restaurant job because of the pandemic’s impact on the economy. “Our leaders stopped serving us, they don’t care about us.”

Netanyahu has rebuked the protesters, tweeting: “Don’t drag the country towards anarchy, violence and attacks against the police.”

But critics say Netanyahu — who normally receives high marks for his economic policies — appeared to lose interest in managing the crisis and failed to prepare a clear exit strategy after the first lockdown.

Promised financial aid has been slow to arrive, and has been dogged by bureaucracy, businesses say.

Some Israelis believe Netanyahu was distracted by plans to annex parts of the Israeli-occupied West Bank. Others say his attention turned to a corruption case against him, in which he denies wrongdoing.

Netanyahu dismisses the criticism. Addressing the delays in providing financial aid, he wrote on Facebook this week: “The money is on its way. We will continue to take care of all Israeli citizens and we will bring more plans soon.”

With a population of 9 million, Israel has recorded 68,000 coronavirus infections, of which 75% occurred post-lockdown, and 497 fatalities. It is now on a “Red List” of countries whose citizens are barred from the European Union.

Many restrictions have been lifted to revive business activity, but unemployment hovers at 21.5% and the economy is expected to contract by 6% in 2020. A Central Bureau of Statistics survey showed 55% of Israelis fear they will have difficulty paying bills, up from 46% during lockdown.

“Israelis understood in March-April that the situation is difficult and were willing to accept it because they felt the government was doing the utmost,” Israeli Democracy Institute President Yohanan Plesner said.

“Now the sense is the government is no longer managing, from both an economic standpoint and a health standpoint.”

Plesner said the long-term implications for Netanyahu remain unclear. But the latest poll would give his Likud Party just 31 of the parliament’s 120 seats, down five. Other right-wing parties would improve their standing.

“The government has broken the contract with its citizens, that in a time of crisis it will take care of them,” said Oren Elgar, 27, a computer mapper protesting in Jerusalem.

Though protests have not reached the levels of 2011, when high living costs brought hundreds of thousands of people onto the streets, they are growing.

“Those who grew up under Netanyahu …(wonder) why there is no money to take care of our economy right now when it’s the biggest crisis we’ve known,” said former member of parliament Stav Shaffir, a protest leader in 2011.

PA wants the world to deal with Israel as an ‘apartheid...

The World Cup has exposed the bankruptcy of the Abraham Accords

Apartheid is lucrative for Israeli tech

Blinken vows US support for Israel despite unease over government

[VIDEO] How Jared Kushner lost at the World Cup in Qatar

Floods in Gaza are getting worse every year