Home nieuws The Establishment Is Gunning for Rashida Tlaib 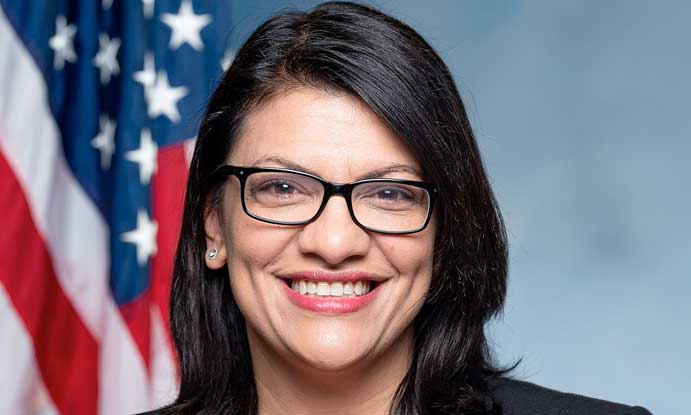 Rashida Tlaib, one of Congress’s most unapologetically left-wing members, is under threat from a challenger backed by super PAC money. The Left must defend her.

Like her colleague and close ally from Minnesota, Ilhan Omar, Michigan congresswoman Rashida Tlaib is facing a primary challenge with support from a political establishment that desperately wants her to go away.

Unlike Omar, who is trailing in funds raised thanks to a massive influx of Wall Street and lobbyist cash, Tlaib does at least enjoy a clear lead in fundraising and is currently blowing out her opponent (Detroit City Council president Brenda Jones) by a whopping margin. But the challenge, which in many ways mirrors the recent effort to take down New York congresswoman Alexandria Ocasio-Cortez, speaks to the ongoing resolve of big Democratic donors and other establishment interests to neutralize the growing insurgency within their ranks.

Unsuccessful though it ultimately was, the primary against AOC created a basic template now being followed by the dark money–backed campaigns trying to knock off both Tlaib and Omar. Sending clear signals she belonged to the party’s “moderate wing” (read: the one that likes to cater to monied donors and corporate interests) and opposed “division” (read: stuff that said donors and interests dislike), AOC challenger Michelle Caruso-Cabrera sought to turn the incumbent’s national profile against her, portraying herself as a genuine local champion taking on an out-of-touch celebrity. As CNN reported in June:

Caruso-Cabrera argued that Ocasio-Cortez is “M.I.A.” and cares more about building a national profile than her constituents. In an interview with CNN, she said the congresswoman “wants to be a national star,” adding, “I want to be a congresswoman for the people of the Bronx and Queens.”

In remarkably similar fashion, Omar challenger Antone Melton-Meaux is running a big money–backed campaign with a decidedly vague message portraying the Minnesota congresswoman as disengaged from her district. The challenge being mounted against Tlaib is unsurprisingly following a similar blueprint, with an added dimension of bad blood. As per the New York Times:

Ms. Jones and her supporters argue that Ms. Tlaib has become too preoccupied with national issues to tend to her district, which snakes through portions of Detroit and a mishmash of suburbs in Wayne County. They say her outspokenness against Mr. Trump and centrist Democrats like Hillary Clinton, whom Ms. Tlaib booed at a rally in Iowa last year, has hampered her work in Congress.

Jones and Tlaib stood against each other two years ago in a special election to replace veteran representative John Conyers, following his resignation for the months remaining in his term. Jones narrowly won, but in a primary held the very same day, Tlaib secured the nomination and soon after entered the House. Now, Jones is running to unseat the congresswoman with the backing of a super PAC called “Concerned Citizens of Michigan” that has contributed some $71,500 out of her $135,000 in total campaign funds. According to local media reports, the super PAC has spent tens of thousands of dollars on mailers emblazoned with false statements about Tlaib’s record and her tenure in Congress. Its core message echoes the one used against AOC and that is currently being weaponized against Omar (the mailer reads: “Has Rashida’s celebrity status on TV improved lives in your community . . . or just hers?”).

Since entering Congress, Tlaib’s confrontational style has quite admirably raised the ire of Republicans and Democrats alike. On the day of her swearing-in, referring to Donald Trump, she told a crowd, “We’re going to impeach the motherfucker.” (Much to her credit, Tlaib refused to apologize, despite a backlash from figures in both parties.) As a Palestinian American and one of the first Muslim women in Congress, she’s also had plenty of racism sent in her direction — from sources ranging from the Christian Broadcasting Network (which called her a “foul-mouthed Islamic congresswoman”) to President Trump himself, who told Tlaib and several of her colleagues to “go back and help fix the totally broken and crime-infested places from which they came.”

Earlier this month, Tlaib successfully added a major amendment to the infrastructure plan Democrats pushed through the House to add $22.5 billion for the replacement of lead pipes that contribute to the poisoning of children — notably in Tlaib’s home state of Michigan itself. As the Detroit Metro Times reports, she has also helped to bring in hundreds of millions of dollars for local hospitals, Veteran Affairs services, student loan forgiveness, and utilities assistance, and has maintained close contact with constituents through several active neighbourhood service centers.

An investigation by the Intercept found that Jones, who will attempt to unseat Tlaib on August 4, once took funds from donors doing business with the city of Detroit — in violation of state political financing rules. In 2017, Jones also took contributions from interests with ties to billionaire Dan Gilbert, Michigan’s wealthiest man and the CEO of a company that received a quarter billion dollars from Detroit City Council. Two years later, Tlaib joined calls for an investigation into whether Gilbert’s political contributions played any role in the awarding of lucrative tax breaks he received on developments in the city.

“This is yet another example,” she said in a statement, “of how corporate greed and the influence of billionaires have infected our government like a disease.” The sentiment couldn’t be more correct, and it’s exactly why the establishment is gunning for Rashida Tlaib. The Left must defend her.

Luke Savage is a staff writer at Jacobin