Home nieuws From Minneapolis to Palestine, racism is the common enemy 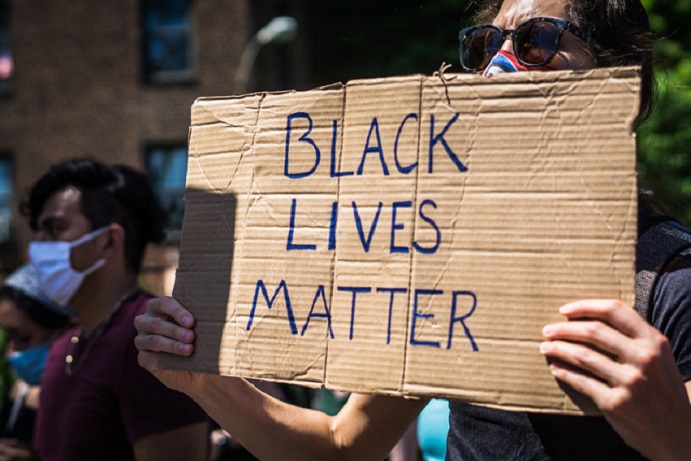 The images of George Floyd suffocating under the knee of a racist police officer who ignored his pleas that he couldn’t breathe, until he gasped his last breath, were shocking to the conscience.

That video, which spread like wildfire among Americans and around the globe, showed an ugliness that still lurks in the world despite humanity’s supposed progress in civilization and social values.

Dignity and equality have long been enshrined in international laws and charters, but those who possess power and wealth act as if they are above the law, secure that they will face no accountability.

In Palestine, we know very well what it means to be discriminated against on the basis of characteristics one did not choose – whether race, colour or religion.

We have experienced long and bitter suffering for no other reason than that we were born “non-Jews” in a land occupied by the Zionist movement, which forcibly expelled the native Palestinian population.

The Zionist movement subjected Palestinians who remained to all kinds of racial discrimination and abuse, to coerce them to leave and make way for settlers from another ethnic group who had not inhabited the land just a hundred years earlier.

In 1948, the catastrophe of the Palestinian people began when the Zionist movement – an extension of white European settler-colonialism backed by the British government – carried out a massive ethnic cleansing campaign.

During the Nakba, Zionist armed groups destroyed more than 500 Palestinian cities and villages and committed dozens of massacres.

The forcible displacement of some 800,000 Palestinians made way for the establishment of Israel on the ruins of the lives of the Palestinian population.

The catastrophe did not end that year. It continues to this day, with systematic policies aimed at driving the remaining population out: land theft, looting of resources and caging the Indigenous population in separate enclaves cut off from one another

The killing of George Floyd, an African American man, lays bare the brutality and danger that stems from a deeply embedded culture of racism.

The situation for Palestinians confronting the Zionist colonial project is no less challenging: Jewish supremacy and racial discrimination are entrenched in Israel’s constitutional law.

Israel proclaims itself a Jewish state, which by definition means it is not a state for all its citizens.

Even Palestinians with Israeli citizenship live under some 65 laws that are designed to discriminate against them and maintain Israeli-Jewish hegemony.

In 1950, just after the establishment of Israel, the Israeli parliament passed the Law of Return.

This grants any person in the world that Israel deems to be Jewish the right to settle in Israel – and the occupied West Bank – and to automatically receive citizenship.

As for Palestinians, Israel subjected them to the so-called Absentees Property Law, which it passed the same year.

With that law, Israel empowered itself to seize the land and property of Palestinian refugees, while it barred them from returning to the places from which they were expelled or fled.

Jewish settlers arriving in the country were the beneficiaries of the law, which allowed them to take over the property and homes of Palestinians.

The remainder of the Palestinian population is still subjected to racial discrimination under Israeli law.

How a person’s identity card fits into Israel’s official hierarchy affects where one can live, who one can marry, the quality of one’s education and work opportunities, access to basic services and the treatment one may face from police.

Whether someone is Jewish or Palestinian is a crucial distinction affecting those rights, even if both are citizens of Israel.

The strategic alliance between the United States and Israel is rooted in similar histories of expulsion of Indigenous people, settler-colonialism and racism.

The United States has a dark history of genocide of Native Americans, enslavement of Africans and racial discrimination. While legalized racism may have ended, its impact persists culturally, socially and economically.

The United States sees Israel as its natural ally because they have similar settler-colonial origins and histories.

Israel likewise views the United States as a source of legitimacy for its policies, given the countries’ historical and present similarities.

While the civil rights movement in the United States delegitimized formal discrimination – although systemic racism persists – Palestinians still suffer under a system of legalized racism, expulsion and confinement to ghettos.

This system denies us the most basic rights enjoyed by people around the world, such as freedom of movement, the right to education and medical care, and the ability to obtain basic needs.

Israeli law asserts the “right to exercise national self-determination” in historic Palestine is “unique to the Jewish people.”

Indeed, what unites racists everywhere is the belief that they have superior characteristics to those of a different race or religion. This means the struggle against all forms of racial discrimination must be global.

It is therefore a duty for all of us, even and especially those of us who live with racism, to raise our awareness and voices against any attack on human dignity in any place.

Ahmed Abu Artema is a writer who lives in Gaza and a researcher at the Center for Political and Development Studies; he is one of the organizers of the Great March of Return

Israel’s colonial expansion does not happen in a political vacuum

Israel melts down over Ben & Jerry’s

Gaza’s children narrate how they survived the Israeli assault

Enlightened Israelis must admit Israel is guilty as charged

[crazy suggestion] Israel security establishment under pressure to distance itself from...

Hamas’ inability to capitalize on the war in Gaza