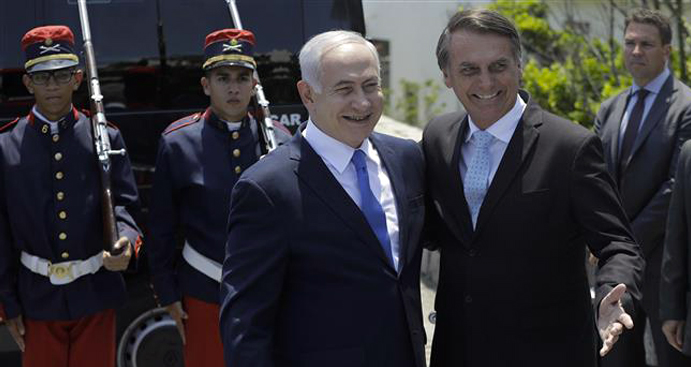 It seems that Israeli Prime Minister Benjamin Netanyahu was right when he said in December 2018 that the government of Jair Bolsonaro will bring “a new era” in relations between Israel and “the major power” Brazil. The extreme right-wing Bolsonaro has turned Brazil into Israel’s new best friend.

With his country facing a severe health and political crisis — Brazil has the second-highest coronavirus death toll in the world — Bolsonaro seems to be preoccupied with other things. Addressing thousands of his right-wing supporters at a protest against the Supreme Court and his political opponents on 3 May, the President of Brazil stood next to an Israeli flag and a US flag. Why would the president of a sovereign state speaking to his own supporters in his own country stand alongside flags of foreign states? What were the Israeli and US flags doing there? As a major donor of foreign aid, the US flag is perhaps understandable, but what are the president’s ties to Israel and what effect do they have on Brazil?

According to Arlene Elizabeth Clemesha, Professor of Arab History at the University of São Paulo, the reason for Bolsonaro’s support for Israel is well known. “It’s to please his evangelical electoral base, and to place himself alongside US policies and geopolitics. He plays a great deal with the imagery of power, and positions himself on the side of the powerful, no matter how negative the political cost may be for [Brazil].”

“President Bolsonaro makes clear his contempt for democracy and his ideological subordination to the American right and Israeli Zionism,” explained Congressman Nilto Tatto from the Brazilian Workers’ Party. “I believe he appeared alongside American and Israeli flags on purpose, to demonstrate that he also wants Brazil to have an extreme right government inspired by the US and Israel.”

When Bolsonaro won the Brazilian presidential election in October 2018, he defeated a leftist opponent, Fernando Haddad. From the very beginning of his presidency, Israel viewed Bolsonaro as a new ally. “I congratulated him on his victory,” tweeted Netanyahu enthusiastically. A few weeks later, the Israeli leader flew to Brazil to attend Bolsonaro’s inauguration.

Netanyahu was the first Israeli leader to visit Latin America’s biggest country. His office described the visit to Brazil as “historic”. Greeting Netanyahu at a synagogue in Rio de Janeiro, Bolsonaro delivered a speech wearing a Jewish skullcap.

The two leaders announced a “brotherhood” between their countries that would boost economic, military and technological cooperation. Bolsonaro gave Netanyahu Brazil’s highest national honour for visiting dignitaries, and the Brazilian post office issued a special stamp to celebrate the 70th anniversary of the establishment of Israel featuring a picture of Netanyahu with the Hebrew word for “saviour”.

Bolsonaro’s election launched a new phase of Brazil’s foreign policy and its relationship with Israel; it was a completely new chapter in foreign relations and the Arab-Israeli conflict. “In fact,” Professor Clemesha pointed out, “Brazil never distanced itself from Israel for more than a short period of time, in order to support Palestinian rights, since foreign policy has always maintained ‘equidistance’ on the issue of Palestine-Israel. With Bolsonaro, for the first time since the period of military dictatorship [1964-1985], this has changed, and Brazil has begun to vote in favour of Israel, against Palestinians, or Syria in the case of the Golan Heights, in the UN General Assembly.”

Under the leadership of the leftist Workers’ Party from 2003 to 2016, Brazil took a balanced attitude towards the conflict in occupied Palestine. Bolsonaro broke that moderate stance, and dispensed with former President (2003-2011) Luiz Inácio Lula da Silva’s support for the Palestinian cause.

In 2010, Lula recognised Palestine as an independent state within the 1967 borders, with most other Latin American countries following suit. Argentina, Bolivia and Ecuador did so almost immediately afterwards, and most of the rest of South America did so within the first three months of 2011.

Until 2013, all Latin American countries officially recognised Palestine as a state, with the exception of Mexico, Panama and Colombia, although Bogota gave such recognition in 2018. In the same year, Lula made the first ever trip by a serving or former Brazilian head of state to Palestine. He had taken many measures in favour of Palestine, including raising diplomatic representation between the two countries and giving a plot of land near the Brazilian presidential palace for the Palestinian Embassy.

This approach was maintained by his successor, President Dilma Rousseff (2011-2016). Brazil had a remarkable stance towards Israel’s military offensive against the people of Gaza in 2014; the Brazilian Foreign Ministry condemned the “unequal” force used by Israel and recalled its ambassador from Tel Aviv for consultations. Rousseff described what was happening in Gaza as a massacre. This led the Israeli Foreign Ministry to describe Brazil as a “diplomatic dwarf”. The following year, Brazil rejected Dani Dayan’s nomination as Israeli Ambassador to Brazil because of his senior position in the Yesha Council, representing Israel’s illegal settlements in the occupied West Bank.

Clemesha explained that, before Bolsonaro, during the 13 years of labour government Brazil gave limited support for justice in Palestine. “In multilateral organisations, we voted, not necessarily in support for Palestine, but based on the principles of human rights and international law. On the executive, presidential level, we sustained vocal support for Palestine when gross violations happened, such as Israeli attacks on Gaza, or Lebanon in 2006.”

Bolsonaro’s relationship with Israel is not a spur of the moment thing; it is deeper. While the Brazilian senate was preoccupied with the impeachment vote against President Rousseff on 12 May, 2016, Bolsonaro, a federal deputy at that time, voiced his pleasure while on a trip to Israel: “From the Sea of Galilee Israel, Bolsonaro congratulates all Brazilians who fought for this moment.”

So Netanyahu was right to view Bolsonaro as an ally. As the newly-elected President of Brazil, Bolsonaro told Israel Hayom on 1 November 2018 that he intended to move his country’s embassy to Jerusalem and recognise the city as the capital of Israel. “Israel is a sovereign country,” he said. “If you [Israelis] decide on your capital, we will proceed accordingly.” Moreover, Bolsonaro threatened that he would change the status of the Palestinian Embassy in Brazil: “Palestine needs to be a country to have the right to an embassy.”

In December 2018, Brazil voted in favour of a draft UN Resolution sponsored by the US Ambassador to condemn the Palestinian Islamic Resistance Movement, Hamas, as a terrorist organisation. That was the first time that Brazil had voted against Palestine and began its transformation towards supporting Israel at the UN. Congressman Eduardo Bolsonaro, the president’s son, celebrated on Facebook: “HISTORICAL DAY IN BRAZIL-ISRAEL RELATIONS. Today the UN voted to censor Hamas and other terrorist groups… This is the first time that Brazil voted in favour of Israel against a terrorist group! Victory!”

In March last year, Brazil voted against a resolution of the UN Human Rights Council which “condemned Israel’s apparent intentional use of unlawful lethal and other excessive force against civilian protesters in Gaza, and called for perpetrators of violations in the enclave to face justice.”

In February of this year, Brazil asked the International Criminal Court to stop its investigation into Israel for war crimes committed against the Palestinian people. “There is unfortunately still vast anti-Israel bias in bodies like the UN Human Rights Council,” the Foreign Minister told the Brazilian Senate. “I realised that during the last 15 years, up to 80 per cent of the Human Rights Council’s resolutions were against Israel.”

That, of course, tells us more about Israel than it does about the UNHRC. The truth, though, is not important to the occupation state’s right-wing supporters who twist reality to suit their favoured country.