Home nieuws Annexation and the need to be proactive 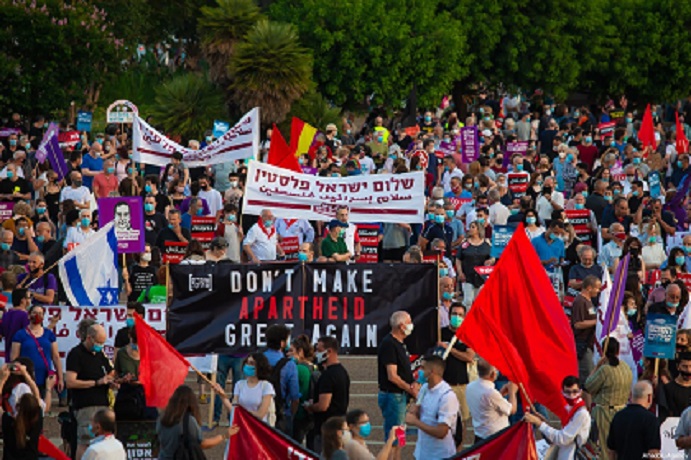 There are a number of issues that the occupation government is escalating: settlement expansion and demolition orders against Palestinian buildings; daily arrests of Palestinians, some of which are accompanied by heinous murders, as in the case of the martyr Dalia al-Samoudi in Jenin; and attacking Jerusalem institutions and the attempt to reduce the Palestinian presence in the city.

The Israeli decision to establish 1,000 new settlement units in the E1 area between Jerusalem and the Jordan Valley was basically the announcement of the start, to all intents and purposes, of the annexation and Judaisation process. Some analysts thought that this had been postponed or stopped, despite Benjamin Netanyahu reiterating almost daily that it is on the table for further investigation and implementation.

Regardless of this, though, Israeli practices on the ground must be seen for what they are: the changing of the status quo, attempts to Judaise Palestinian areas and the actual annexation of all of the areas that are unfortunately classified as Area “C”, meaning 62 per cent of the West Bank.

This indicates the significance of the leaked statement by US diplomats to their international counterparts about disregarding UN Resolutions 242 and 338 and other international resolutions. They are old, it is claimed, and reality changes with time and changes every day.

The measures required to deter the annexation process and prevent the implementation of the deal of the century must not be linked to or wait for an official announcement that annexation is about to begin. They must be connected to the continuation of Israel’s colonial settlement policy, and its actual consecration of the apartheid system.

The Israeli government is studying the reactions to its practices and its stated intentions to implement official annexation, and it tries to contain these responses and adapt its measures accordingly to absorb them. However, it is facing three obstacles that can be seen clearly: the physical presence of Palestinians resisting its plans and rejecting the apartheid regime; the possibility of facing real sanctions, including a boycott that is growing exponentially at the popular level; and the Palestinian consensus to reject the deal of the century, its maps and its plots.

On the other hand, it is racing against time, fearing that Donald Trump will lose the November presidential election.

On the Palestinian side, the most dangerous thing that could happen is the adoption of a watch-and-wait policy, or the overestimation and exaggeration of what the fall of Trump and the election of Biden might mean. This is because even though Biden is against Netanyahu’s annexation plan, he will not stand in the way of the continuation of the three de facto processes that I mentioned above.

Continuing the process of changing the status quo, officially or not, means eliminating the possibility of establishing an independent Palestinian state. Suffice to say that the number of colonial-settlers in the West Bank and Gaza Strip was no more than 120,000 when the Oslo Accords were signed, but today there are 750,000.

Whether it is Trump or Biden sitting in the White House, and regardless of whether Netanyahu or Gantz is Israeli prime minister, the Palestinian steps that must be taken as a matter of urgency remain the same: real national unity; adopting a unified national combat strategy; and effective activity to impose a boycott on the occupation and the apartheid regime.

The Palestinian people will not be in crisis if their various factions and leaders adopt the correct approach. They will be in crisis, though, if they remain reactive instead of proactive.

Mustafa Barghouti is a Palestinian physician, activist, and politician who serves as General Secretary of the Palestinian National Initiative, also known as Al-Mubadara