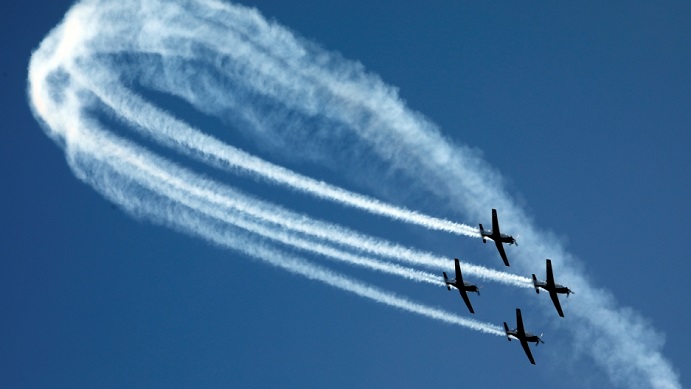 Gulf elites and politicians are cheering Israel on as it escalates its attacks on Arab countries in the region this month.

Israel bombed sites in Iraq, Syria and Lebanon in the past week alone, with an underlying aggression towards Iran at the core of these attacks.

All the attacks were on sites belonging to groups purportedly supported by Iran. They included the Lebanese resistance organization Hizballah and Iraq’s Popular Mobilization Forces, which helped defeat the Islamic State group also known as ISIS.

Gulf states are salivating at the prospect of directly enlisting Israel’s military might in the proxy war by Saudi Arabia and its allies against Iran.

“Iran is the one who declared war on us, with its Revolutionary Guards, its Lebanese party, its popular mobilization in Iraq, its Houthi arm in Yemen and others,” Al Khalifa tweeted.

“Those who beat them and destroy their equipment are not to blame. It’s self-defense.”

This was not the first time Al Khalifa endorsed Israel’s military attacks against its neighbours.

Al Mazrouei has been referred to as a blogger and a journalist by several websites, but he is not registered in the UAE Journalists Association, according to Emirati newspaper The National.

“Why aren’t we, Arabs, hitting those targets?” Al Habtoor said in a video he posted on Twitter.

“Israel is hitting them on behalf of Arabs,” he added. “It hits terrorist sites that threaten the entire Arab world, especially us in the Gulf Cooperation Council.”

“We have to hit these locations.”

Al Habtoor also mocked anyone who would refer to Israel as an “enemy.”

Al-Ghabin suggested on Twitter he will contribute regularly to the newspaper.

“Israel is a logical future partner for us as we have mutual enemies: Iran, the Muslim Brotherhood, al-Qaida and a handful of reckless rulers who remain in power in our region,” he wrote.

He failed to note how Israel has, in fact, supported and even armed al-Qaida-linked militias in Syria.

“We don’t know if the royal family of Jordan will remain in power by the time Jordan officially becomes Palestine,” al-Ghabin stated.

“While Palestinian children die to become ‘martyrs,’ Jordan’s king cruises the Mediterranean in his yacht and Abbas’ sons are likely to be found vacationing in Nova Scotia – the preferred destination, I am told.”

Turning Jordan into an alternative state for Palestinians, so that Israel can seize the whole of historic Palestine, is a longstanding dream of the Israeli far right.

Al-Ghabin appeared on Israel’s i24 News last month calling on Saudi Arabia to seize control over Jerusalem’s holy places from Jordan, which acts as a custodian. Al-Aqsa mosque is one of Islam’s holiest sites.

The Saudi journalist makes the same case in Israel Hayom.

“The king of Jordan has neither been maintaining or protecting the site,” al-Ghabin writes.

“Instead, Saudi Arabia could offer the proper custodianship for al-Aqsa under a new arrangement.”

Al-Ghabin boasted that his country allows Iranians to make pilgrimage to Mecca despite how most “belong to the Shiite sect,” showing clear sectarian prejudice.

“Condolences to Mohamed Abdelaal who lost 2x today – once as an athlete and once as a decent person,” he wrote.

Mollaei lost the match that would qualify him to face Muki.

Israeli media claimed that the Iranian athlete intended to face Muki but faced pressure from Iranian intelligence agents who showed up at the event, as well as Mollaei’s family home.

It is unclear how credible this reporting is.

In the past, an agreement was reached between the International Judo Federation and Iran’s national Olympic committee, conceding that the latter will “fully respect the Olympic Charter and its non-discrimination principle.”

The statement does not name Israel, but the move was understood by Israeli media as a response to Iranian judokas’ refusal to fight Israeli athletes and to forfeit matches instead.

Tamara Nassar is an assistant editor at The Electronic Intifada.