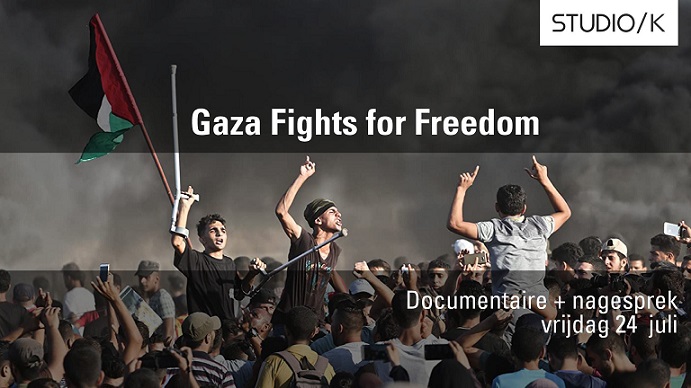 On Friday 24th July we will be screening the film Gaza Fight for Freedom (with English subs), after which a Q&A will take place.

Surrounded by walls, the Gaza strip is the largest open air prison in the world. According to the United Nations, Gaza has ceased to be ‘liveable’ since 2020 because of a lack of basic necessities, such as clean drinking water.

During this event, we’ll be screening the critically acclaimed documentary Gaza Fights for Freedom, about the Gazan struggle against Israeli occupation, followed by a talk and Q&A with Naida Benaissa & Ezz Al Zanoun.

How is the Israeli blockade affecting Gaza’s response to the coronavirus? And what can people in the Netherlands do in solidarity with Gaza? Join the discussion on the 24th of July.

Filmed during the height of the Great March Of Return protests, Gaza Fights for Freedom features exclusive footage of demonstrations where 200 unarmed civilians have been killed by Israeli snipers since March 30, 2018.

This debut feature film by journalist Abby Martin began while reporting in Palestine, where she was denied entry into Gaza by the Israeli government. So Abby connected with a team of journalists in Gaza to produce the film through the blockaded border.

The documentary tells the story of Gaza’s past and present, showing rare archival footage that explains the history of Gaza that is rarely acknowledged or covered by western media. You hear from victims of the massacres, including journalists, medics and the family of internationally-acclaimed paramedic, Razan al-Najjar. At its core, ‘Gaza Fights For Freedom’ is a thorough indictment of the Israeli military for war crimes, and a stunning cinematic portrayal of Palestinians’ heroic resistance.

Nadia Benaissa is a volunteer for the foundation Kifaia, which has supported medics in Gaza for over 20 years. Kifaia is one of the few organizations in the Netherlands that is authorized to visit Gaza and works with the Palestinian Medical Relief Society (PMRS), for which the murdered Gazan paramedic Razan al-Najjar volunteered.

Ezz al Zanoun is an independent photojournalist and filmmaker whose work regularly features in Al Jazeera, Middle East Eye and Electronic Intifada. Zanoun was born and raised in Gaza City, where he started his photojournalism career.

This program is organized by Studio/K in collaboration with Foundation Kifaia, which has supported health care in Gaza for over 20 years. 50% of ticket sales will be donated to Foundation Kifaia.

This program is organized by Studio/K in collaboration with Foundation Kifaia, which has supported health care in Gaza for over 20 years.

50% of ticket sales will be donated to Foundation Kifaia.